Student Name: Evan Sanders
Student Age: 17
Student Height: 1,70 mtr
Student Weight: 77 kg
Student Eye Color: Lime
Student Hair Color: Hazel
Student Gender: Male
Student Dorm: Ra Yellow
Student Deck: Ojama Armed Dragon
Student Background: Evan joined last year together with Zachary. They used to be friends, one from the rich family, one from a poorer family, but that friendship broke when Evan couldn't get into Obelisk. Zachary drastically changed and became a diva, while Evan was left behind. He now just focuses on having fun with his duels, rather than to play to win.

After the dark take over of Duel Academy, Evan got promoted to Ra Yellow and studies harder than ever now. He tries to repair his old friendship with Zachary whenever he gets the chance especially after their duel against Logan. He learned not all duels are fun anymore and could be painful like the stories of old times with Yugi and others during the Battle City tournament. Evan seems more determined than ever to get better at dueling and not just for fun but to protect people(himself or others) if need be after learning not all duels will be fun similar to the times of during the Battle City tournament and rumors of Shadow Games.
Student Picture: 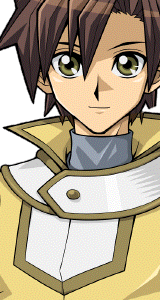