Ashelin walked into the Ra Yellow dorm and sighed looking around again before heading towards her room to get her stuff. After grabbing her clothes and objects and packing them up, she slung her bag over her shoulder and went to the Ra Yellow boy's dorm and stopped one of the students. "Hey have you happened to seen Logan around?"

Logan tapped her on the shoulder, standing behind her. "I heard the news. Demoted on your first day, it's what I warned about. But, I'm confident you'll get back. Granted you'll put in the work." 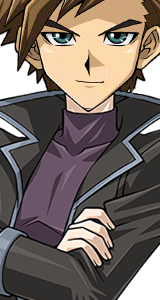 "Thanks, and yeah I'll put in the work. Anyway the dorm I'm in doesn't really matter for what I'm studying." She leaned against the wall and sighed. "So I'll be heading to Slifer Red, if you want to escort me. To make sure Zachary doesn't try anything."

"Sounds like you gained some brains along that duel. Don't worry, he got you in a rather embrassing manner, I think you're safe from him. Granted, you don't pull a stunt like that again." He walked past her, then turned around abruptly. "Actually. Here's something that might help you. Try her out, and see if you deserve it." He handed her a card, Elemental Grace Doriado.

Ashelin took the card and looked at it. "Thanks Logan." She then smiled and hugged him and then backed up. "I guess I'll get going to the Slifer Red dorm for now. Before I go do you know anything about the students and teacher in charge of the dorm?"

"Well, you won't like who's in charge. Professor Sirius, the man that got you demoted in the first place. Well, the man that made it official, you're the one that got it done. Anyhow, he's a fairly chill guy, but he doesn't tolerate slacking or screwing around. Something with him having put so much effort into teaching, or something. Other than that, don't expect any Blues to like, or respect you. Ra's are, different. It depends on who it is."

"Hmm..alright good to know. Well if you ever wanna have a study session sometime, let me know." She then turned and waved back as she started heading off following the path to the Slifer Red dorm.