Madison stood ready near the entrance of the Obelisk Blue Girls Dorm, Dueldisk attached and powered, Deck shuffled and arms crossed, waiting for her challenger. She'd seen Ashelin duel against Zachary, and the Deck was a defensive elemental Deck. It posed a few issues, due to its Charmers being able to snatch opponents monsters with the same attribute, which was interesting, since she herself used a multitude of Attributes. But on the department of proper defenses and offenses the Deck lacked sorely.

And then there is the part of the Duelist herself. The fact that she bluffed the Slifer girl into not attacking with Cyber End Dragon meant she played mindgames, or at least attempted to. So no doubt there would be strategies that would make her have to second guess all her moves, but she was set and ready. 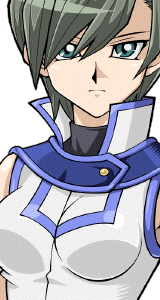 Ashelin walked up to the lake and then looked to Madison before bowing slightly. Seeming a bit nervous and on edge, but in a happy sort of way. "I'm ready to test myself against you. Good luck Madison." She then raised her duel disk and activated it, having her deck shuffled.

"We'll see that in the match." She raised her arm ever so slightly, and drew her first hand. "Let's go."

After losing she sighed and looked at her hand of 4 crappy "Element" monsters. "I need to drop these from the deck one day."

"Or you can drop the whole Deck. It's too passive. You wait for your opponent to make the plays, but then you're a tempo behind. By playing passively, you let the oppnent dictate the pace of the game. If you can't keep up, you fall behind. Such as with your duel against Zachary, and again here."

"Not even sure what I would even play, I can't really drop this deck either. I got a card from a friend in it now as well. So just dropping the deck would feel a bit rude, I just need to change the deck to be more offensive."

"Exactly. Just because you draw a bad hand once doesn't mean the Deck has to be trashed, or discarded. Luck is an essential part of the game, whether you like it or not. If you can't accept that, you don't belong here. For you the challenge now will be to find out what you'll do with this information." She stowed her deck and turned around, walking into the Girls Dorm. At the entrance, she turned around, looking at Ashelin. "Keep at it. Don't give up. You have friends that believe in you." With that, she walked inside, leaving Ashelin alone on the Academy grounds.