Jim sat down, Jess Courtenay opposite of him in the classroom. Everyone had already left for the break, but Jim had requested Jess stayed for a bit longer. He knew Madison wouldn't take the training serious, and as much as he got along with Sirius, he wasn't about to put this issue on his shoulders.  Getting out a book, he looked at Jess, placing the bible-sized textbook in front of her.

"Look here Jess. This here's garbage. Pure 'n simple. I don't expect you to learn anything from dueling by reading these books. Maybe you're a reader and you get through it, but Dueling isn't just numbers and patterns. It's a personal experience you share with another person. Your duel style says something about how you are as a person, your deck says something about who you are as a person. Textbooks don't cover that. Now, I know you're a Slifer and you have, so you think, virtually no skills. I wish to change this. Show me your Deck, if you'd please." 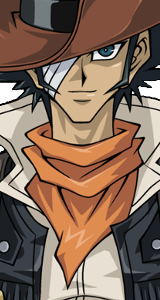 Shy, she pulled out her Deckbox and opened it, extracting her new Deck and placing it on the table. "I hope you're not mad about the Deck switch with Madison ... "

He shook his head with a smile, picking up her Deck. "Not at all, gal. These things are between you kids. If you wanna trade your cards, it ain't my place to tell you otherwise. Now, Madison was supposed to teach you these cards. What has she told you yet?"

"Well nothing yet, really. She was busy trying to keep off people dueling her and as far as I know locked herself in her room." She had worried already about Madison's well being. It might very well be that losing that duel was gonna ruin her last 2 years on the Academy.

He looked at the empty classroom behind the girl. Course she didn't, she wouldn't just give the girl the ticket to properly using Crystal Beast.

"Well, that's ok. I'll help you with with that, if you want. You see here, these Crystals Beasts are from ancient Rome. Julius Ceasar himself gathered 7 precious gems from all across the known world. He then shipped them to Rome, but before thye got there, fate intervened and sank the ship carrying them. Pegasus found them eventually on the bottom of the ocean, and made them into these 7 cards." He laid out each Crystal Beast on the table.

"These cards have their own very specific playstyle. When they're destroyed, instead of going to the Graveyard as regular monsters, they stay behind in your Spell and Trap card zones as crystals. These crystals are considered Continuous Spell Cards in the game. While they're there, they have no function. But that's all right, because all your other cards work with that, primarily this card, Ancient City - Rainbow Ruins." He put the Field spell next to it. "Now this here gets more effects with more crystals on the field. That's where their power really lies, the variety of effects and reliability of the Deck."

"That's not what you're after. Your best card's this here. Rainbow Dragon. It can only be summoned if you have one of each Crystal Beasts on the field or in your Graveyard. So you can let a few slip to the Grave with your effects or letting them go by battle, and before you know it, you can pull out Rainbow."

He put all cards back in the deck and shuffled it a few times before handing it to Jess. "Let's do a duel now. No stakes, nobody watches, just you and me. And after it, we'll look through it, evaluate, and duel again. Until you're getting the hang of it. That sound good?"

She nodded, then placed the deck in her Duel Disk and stepped back, activating the device. "I'm ready when you are, Mr. Cook."

"Then let's go, girly." He activated his own Duel Disk and drew his hand, starting off one of the many to come duels.

The duels were finally done, and Jess crashed against the desk sliding down to the ground, tired beyond belief. "That ... was ... intense ... I can't see another card for the next two years ... "

"I reckon that's about right. But you've learned a lot in these 4 games. You know how their tactics work and how to bring out their power. You know how the Pegasus Eagle loop works, and most of all, you believe in yourself."

He put his Duel Disk aside and helped her up to her feet again. "Logan's gonna have his dorm promotion match against that girl of yours next week. Ashelin. I want you to try for promotion after that. How's that sound?"

She looked at him with big eyes, filled with unbelief. "PROMOTION match? You think I can already upgrade to Ra? But these were 4 duels, how can 4 duels increase me to an entirely new Dorm?"

"Well, you have a connection with your cards. They trust you and you trust them. Madison took months to master the Deck, you have them understood in merely a couple duels. Sure, you don't master the game, and that's where Sirius comes in to help. He'll still have to teach you the basics of dueling. Tactics and what not. But I'll be around for the Crystal Beast specifics."

She looked down, unable to fathom that she could already make it to Yellow. Of course, professor Vari would have to agree on the idea, but. The chances of her already having spiked to Ra level were. Not exactly reliable. Yet, she beat professor Cook a few times here. Sure, he could´ve given her the wins, but he did seem to try his best.

After some consideration and doubting she finally looked back up to him and nodded. "I'll do it."